Following this month’s Board meeting, non-executive director Alison Vipond shares her thoughts on the latest developments in the world of global climate change policy and sustainability…

It is #GlobalGoals week – a week of celebrating the anniversary of agreeing the UN Sustainable Development goals, to make them famous.

We all have a role to play. There is a now a UN Sustainable Development Goals app bringing the goals personally to you. There is also the Lazy person’s guide to saving the world (on un.org) with inspiration on positive steps we can all take, from the sofa, in our home and outside the home. As individuals, as friends, as families, we all need to own the goals. But we also need to make sure businesses and governments are held accountable for delivering their part. At Ecology, we are building our role in achieving the goals into everything we do. 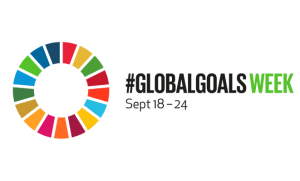 Some encouraging news from Theresa May this week – the UK will hurry up and ratify the Paris Climate Agreement before the end of year. The agreement, which has cuts to greenhouse gases and aspires to keep temperatures below 1.5 degrees above pre-industrial levels, will not enter into force until ratified by 55 countries, representing 55% of global emissions. More good news is that the two biggest emitters, US and China have also agreed that they will soon ratify. This is a significant advance.

The news that Government has given the green light to the £18 billion Hinkley Point C nuclear power station to be built by EDF with £6 billion in Chinese investment, has been met by mixed reaction. On the one hand, if it is built, it will replace ageing power stations and produce energy without emitting greenhouse gases. However, if it gets built is a big question. Also, by investing in risky nuclear (with a new reactor design and the massive legacy of nuclear waste) we are delaying getting on with the real green investment in renewable energy, energy storage and energy efficiency. They are the elements of properly clean energy.

Also, this week, we’ve been reminded of the “cost of cold” – that is the growing need for refrigeration and air conditioning. Worldwide power consumption for air conditioning alone is forecast a 33 fold increase by the end of the century, as developing world incomes rise, more people live in urban areas and there are more heat waves. By 2050 (that’s only 34 years away) people will use more energy for cooling than heating.

Refrigerators and air con systems also use chemicals called HFCs (hydrofluorocarbons) as the coolant. HFCs are extremely potent greenhouse gases (1000 times more potent than carbon dioxide) and their use could add half a degree Celsius to global temperatures by the end of this century. Given the Paris Climate Agreement aims to limit warming to 2 degrees (and aspires to 1.5 degrees), the contribution from HFCs is huge. Fortunately, more than 100 countries came together in New York this week to call for an early phase-out of HFCs, and a group of 16 countries, including the UK, has agreed to provide $27m next year to help support an early end to HFCs, by finding alternative, more efficient cooling systems. Private philanthropists, including Microsoft billionaire Bill Gates, have pledged a total of $53m.

All this is a stark reminder of the environmental costs of keeping cool in a warming climate. It’s also time to think about what we can do to use more naturalistic methods of cooling, such as planting trees for shade, and having blinds on windows facing the sun.

I’ll end on a positive note. Renewables and green technologies got a boost from The Bank of England Governor, Mark Carney, this week. He championed investment in green technology to help cut carbon emissions and boost global economic growth, recommending that more of the $100 TRILLION held by big global investment firms could be channelled into green bonds to help finance green initiatives including renewable energy. Last year, $42 BILLION of green bonds were sold worldwide. There is scope for massive ramping up.

He also called for a comprehensive climate policy framework to give companies enough information and certainty to make green investments. Indeed, it seems logical that once governments set out clear Energy Policies that are fully aligned with renewables, energy efficiency and storage, then the industry will innovate and investors will invest….. and a great green energy revolution will happen. Bring it on.

Three months into Daryl and Hannah’s renovation In the second instalment of our new regular blog feature Daryl, a website manager, and Hannah, a Director of a parenting ...

How Can We Reduce The Impact Of Our Buildings?

As Earth Overshoot Day looms large, we consider five ways to improve the environmental performance of the UK’s homes and buildings.  Ongoing speculation about the trajectory ...